Another original development from Yggdrasil Gaming company is dedicated to an ornamental plant called holly. It grows in the form of bushes and trees, on which appear small colorful berries. They became the main symbols of the slot machine Winterberries.

In the background you will see a beautiful snow-covered forest, in which the holly sprouts. In addition to colorful graphics and unique symbols, the video slot will also delight users with generous payouts and several prize modes. All this is available in a demo game Winterberries, and the full version of the slot. The game has only basic thematic pictures, which are represented in the form of multi-colored berries holly. On the screen fall out:

The highest odds have large Yellow Berries. All other pictures bring the average payment. Special images in the video slot is missing, but it does not spoil the game Winterberries. In the information section you can find the conditions, fulfillment of which activates the bonus feature.

Thematic bonus rounds are not provided. Instead, the developers have equipped the slot machine with two prize options. These include:

If you were able to collect any prize combination, then you can win one re-spin in Winterberries. The symbols that participated in the creation of the prize chain remain in their positions and begin to freeze. Remaining pictures on the field, scroll again. If another identical symbol falls anywhere on the screen, it also freezes.

At this time, the reels start spinning again. Thus, the whole field can be filled with identical icons. When the reels start to freeze, you will get additional multipliers. Starting from 1 reel, multipliers from 2 to 5 will be assigned. At the same time the drum must be completely iced. You will not depend only on a desktop computer, but also be able to open the game on a tablet and smartphone. After starting the slot, you will see a playing field that includes 5 reels and 25 active lines. 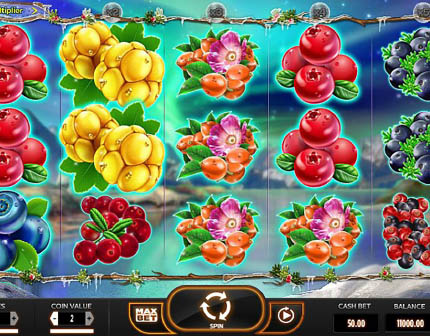 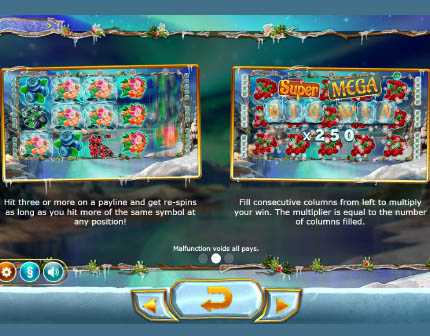