User Ratings:
5
Wild symbols and a one-of-a-kind bonus round that allows players to smash ships will be available to players. Try it today and be on your way to bagging great cash prizes. Find out as we go over the symbols, extra features, betting possibilities in this five-reel, 25 pay-line game.
96%
RTP
30 Paylines
Paylines
5 Reels
Reels
WMS
Provider

Star Trek Red Alert is the first of six episodic slot games based on the popular Star Trek TV series. WMS created the game with five reels and 25 fixed pay lines. Players will be able to experience Wild symbols and a unique extra round that allows them to demolish ships.

Star Trek Red Alert takes place aboard the Starship Enterprise. The reels' backdrop is made out of moving stars, giving the impression that the game is soaring across space. The symbols in the game are drawn from the Star Trek TV Series and include Captain Kirk, Bones, Spock, Kang, the Starship Enterprise, a Phaser, a Communicator, and many more that you will identify from the show.

You can bet a maximum of 35 coins, one per payline and ten more. Of course, your winnings will be more pleasant with a greater wager.

The Red Alert bonus is the main lure to this game. When three or more Feature symbols appear on the reels, you are moved to a second screen where you are urged to brace yourself for a fight. The Starship (USS) Enterprise crew is then shown diving to the floor as a particle beam attacks their ship. The Enterprise is on the left side of the top screen, while a fleet of Klingon spacecraft is on the right. The multipliers for each Klingon ship range from 2x to 15x.

When you get a successful spin, the Enterprise shoots at one of the ships, awarding you a multiplier. When you have a losing spin, you are struck by a Klingon beam and lose one of your five shield-free spins.

Here are the symbols you’ll find in the Star Trek Red Alert:

The Star Trek icon can replace all symbols except the Feature icon, which is mentioned in the bonus section, and it does not pay out on its own.

Spock, the Vulcan race's second in command, pays 500 credits for five symbols, 150 for four, and 40 for three.

The Starfleet insignia denotes a member of the Starfleet, which serves the United Federation of Planets by exploring space and maintaining peace. The emblem is worth 1,500 credits for five symbols, 750 credits for 4, and 250 credits for 3.

You will gain additional medals as you progress through Star Trek Red Alert. These will be given out to use one of the various features. Players may find the number of medals required to unlock further ‘episodes’ in the series at the top of the screen.

Earn enough medals in this game to unlock 'Explore New Worlds,' with 'Trouble with Tribbles' serving as the third episode in the series. As you acquire medals, your rank in the game rises, and this information is kept for the next time you play.

The Basic Game - Beam Me Up 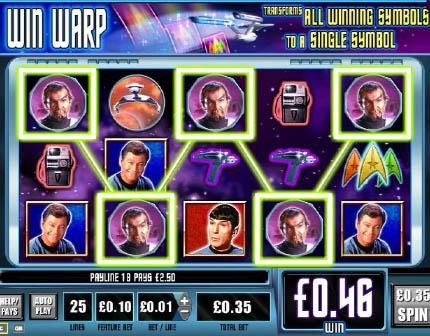 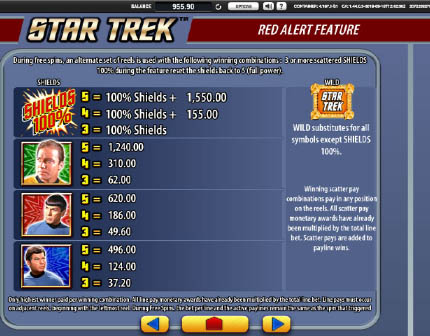