User Ratings:
0
Yggdrasil has long been famous for its selection of non-standard themes for slot machines. It presented the world Incinerator online slot, which is not like any other game in the world. Futuristic design, at first glance, says that the game about some modern mechanisms and makes you feel like an engineer of the future.
96.1%
RTP
20 Paylines
Paylines
5 Reels
Reels
Yggdrasil Gaming
Provider

Yggdrasil is a master of surprising with special slot machines. In 2016, the developers released a novelty with the original name Incinerator. What does this unusual name mean? Sometimes such a term can be called crematoria. However, what of these concepts the developers took for the idea, you can learn only after a brief review.

Although Incinerator slot machine does not have any specific theme, but it's not so. The developers have done their best and equipped the machine with unusual design in the style of techno and original options. Particularly they wanted to satisfy the player animation effects.

Before starting to play you can see the video which reveals the theme of the machine: the player will find himself in the world's largest incinerator and have a chance to clean the outer space.

Gradually the roller action moves to the playing drums. Thus, an enticing world of the future opens before the gamer, opening its secrets and beckoning with yet unseen functions. Here at Incinerator slot machine each player can become a member of the purification process, which allows you to rid the expanse of space of all kinds of space debris and debris of spacecraft. Who knows how close that future is, and Incinerator will allow you to visit it right here and now.

The essence of the game is that it is necessary to burn in the furnace as much wreckage of a spaceship as possible, while winning if a combination of 3 or more of these parts (symbols) comes up. Moreover, in place of the burned wreckage appear new ones, and the process becomes even more exciting. The payout is calculated by multiplying the bet made by the coefficient of the combination.

To start the game, you need to make a bet, select lines and click on the big button in the center of the control panel.

The game interface is so simple that even a beginner can easily understand it. Incinerator has no bonus game, but Yggdrasil can not fail to interest the player and added a twist to his novelty.

Wild symbol is activated on 3 consecutive winning combinations. This option consists in the fact that some symbols on the reels become Wild. Which of them become wild is determined in the window to the left of the playing field (there are 16 such patterns in the game). Thus, prizes fall out quite often, and if Fortune will turn to the player, he can get an infinite number of spins with disappearing symbols. That is, in this option, everything depends solely on chance and not on the skills and abilities of the player. RTP is 96.1%. 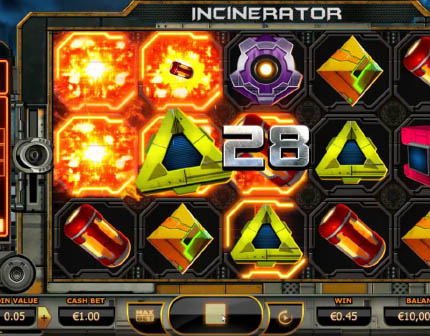 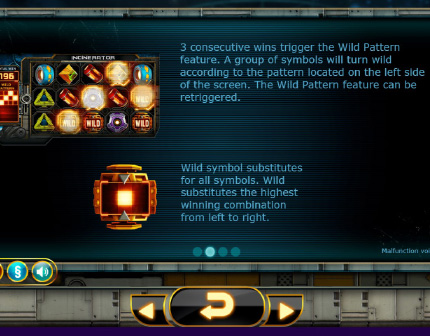